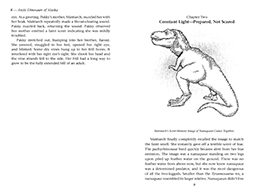 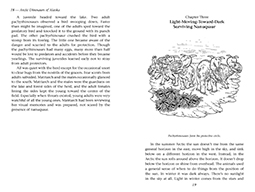 A novel for middle grade readers.

Pachyrhinosaurs and other dinosaurs lived on the North Slope of Alaska seventy million years ago. They lived near each other and migrated together in a loose-knit community. The story follows Pakky as she experiences her first winter and learns about snow and ice. She meets other species of dinosaurs and is injured by ravenous Dromaeosaurs. In the spring, she migrates with her mother, Matriarch, back to their summer feeding ground.

"In Arctic Dinosaurs of Alaska, we get to enter into the minds of Arctic dinosaurs. True, we don't really know what went on in their relatively small brains, but the very fact they lived there for millions of years suggests they knew what they were doing, and they had the skills necessary to survive many challenges they faced. In the process of imagining their lives, we open a window into a world unlike anything on Earth today…" Patrick S. Druckenmiller, Ph.D. University of Alaska Museum of the North Department of Geosciences, University of Alaska Fairbanks

Tweets by BonnyeMatthews
Scroll To Top